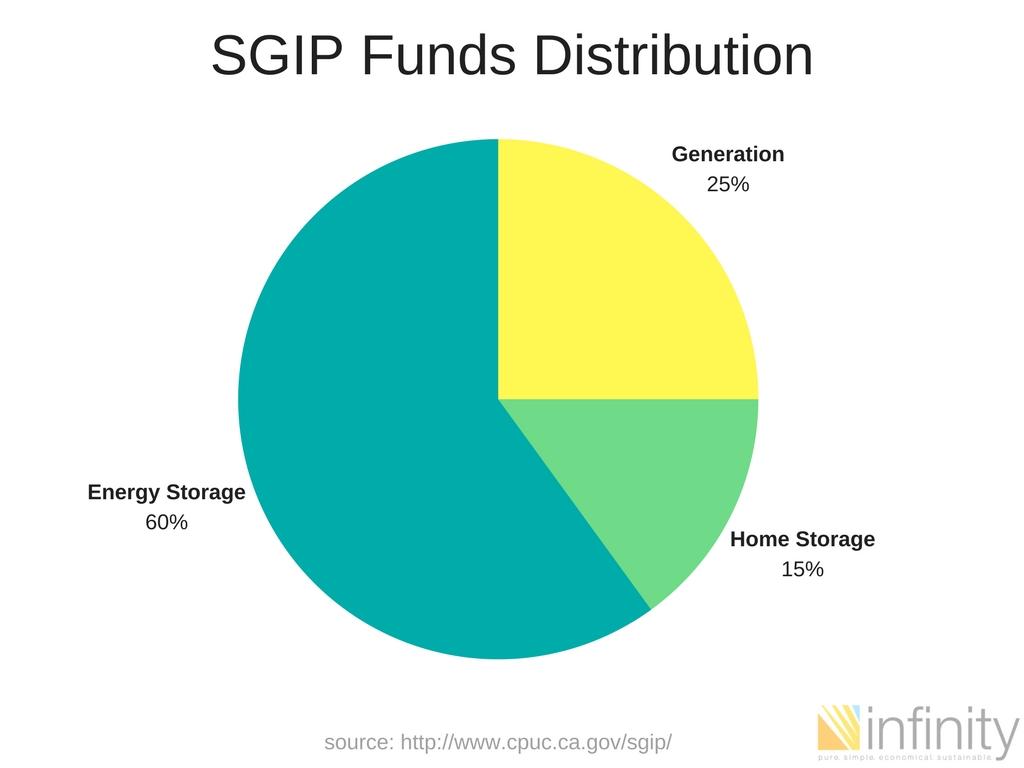 IMPORTANT MAY 2017 UPDATE: Most Of California’s SGIP Allocations Taken Up After May Opening

Have you heard about the Self-Generation Incentive Program, or SGIP, rebate that is offered by the state of California?

It’s one of the best incentives in the entire country for homeowners who have solar panels on their properties. Simply put: It is a high-level rebate that applies to your installation of solar batteries that store the energy generated by your home’s solar panels. It’s called a high-level rebate because it could potentially cover most, if not all of the cost of solar battery installation.

SGIP Can Help You Save Money

The SGIP was originated back in 2001. The program was originally intended to support a wide variety of so-called “behind the meter” technologies that you may have installed in your energy efficient home. These technologies can include, but are not limited to, fuel cells, combined heat and power generators, and energy storage systems such as solar batteries.

Until recently, most homeowners in California who have energy efficiency or energy generating system in their homes didn’t take advantage of the program because the process of applying for the SGIP rebate was a difficult one at best.

Now, though, there is good news for everyone who has been wanting to take part. SGIP is getting a major overhaul. With this overhaul, there will become changes to the program, let’s take a look at those.

First, customers of PG&E, SCE, or SDG&E are getting a bigger rebate than ever before. The rebate may now run as high as $600 per kilowatt hour when you have a home battery installed. Now the actual value of the incentive will depend on the size of the battery that you have installed. Also, it pays to get in soon on the SGIP. Early adopters will get a high rebate, but as more and more solar batteries are installed in the state the value of the rebate will drop.

Have a Tesla Powerwall? Here’s How the SGIP Can Help You Save

Generation 2 of the Tesla Powerwall is rated to have a 13.5 kWh capacity, so with an eligible rebate level of $500/kWh, you could get an incentive totaling around $6,750.

The second major change is that now 75% of the program’s total funding base is being earmarked for energy storage such as batteries. That means that there is going to be around $62M annual for the rebate program. This is a big change as previously most of the funds were set aside for fuel cells and energy production systems. Around 15% of the funds are set aside specifically for residential application. This means more money for the program and more available slots for those homeowners who want to take part and reduce their municipal energy reliance even further by installing higher capacity battery systems.

The last major change is that you used to be able to only get the rebate once a year. If you installed your system after that period had already occurred you had to wait almost an entire year for the window to open again and get your money back from the out-of-pocket costs. Now the program will release funds all year, so after you have completed the certification process of the application, you can be looking for your rebate within a few weeks.

How Can You Get the Best Price on Your Solar-Plus-Storage System in CA?

The California incentive for home energy storage systems is just another indicator of how the state is quickly taking the lead on energy efficiency and sustainability in the country. With SGIP, homeowners who install a battery with their new solar systems can combine their rebate with the Federal Investment Tax Credit of 30% and cut the potential out-of-pocket costs even further, by as much as half in many cases.

Infinity Solar is proud to be Tesla certified and an authorized PowerWall installer. Contact us find out how you can create a home with renewable energy.

Get your free customized solar evaluation and quote TODAY!