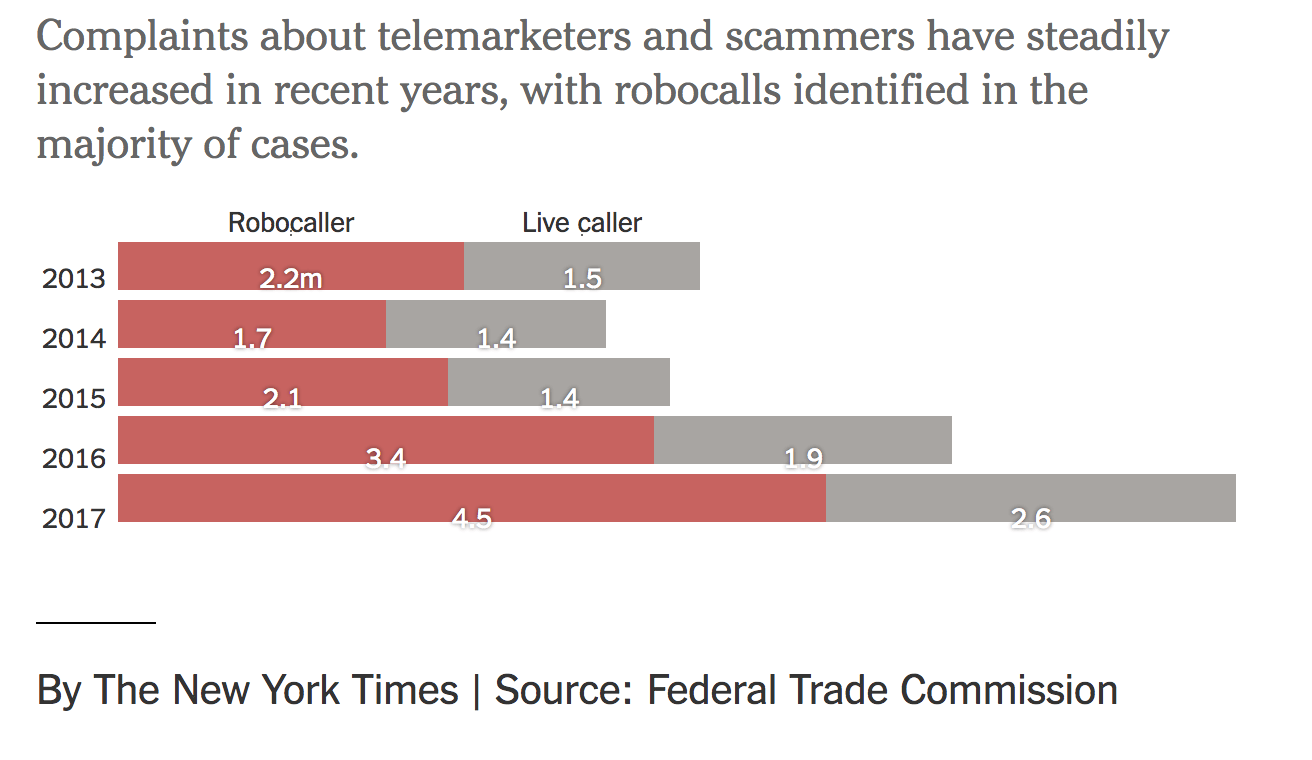 It’s not your imagination. Those annoying robocalls are becoming more frequent. And, while consumers aren’t happy about it, lawmakers have taken note.

Robocalls in the Billions

A recent New York Times article states that the volume of robocalls has skyrocketed in recent years, reaching an estimated 3.4 billion in April 2018. That’s an increase of almost a whopping 900 million a month compared with a year ago.

Federal lawmakers have noticed the surge. Both the House and Senate held hearings on the issue within the last two weeks, and each chamber has either passed or introduced legislation aimed at curbing abuses. Federal regulators have also noticed, issuing new rules in November 2017 that give phone companies the authority to block certain robocalls.

Robocalls are cheap and easy to do. In fact, millions of consumers can be reached daily at little cost.

What’s worse… These calls can travel through various carriers and a maze of networks, making it hard to identify their origins. And, in recent years, their deceptive measures have become more sophisticated. In one tactic, known as “neighborhood spoofing,” robocallers use local numbers in the hope that recipients will be more likely to pick up.

Regulators are working with the telecommunications industry to find ways to authenticate calls, which would help unmask the callers’ identities.

The federal Do Not Call List, which is supposed to help consumers avoid robocalls, is doing very little to stop the onslaught of robocalls. The list may prevent some (but not all) legitimate companies from calling people on the list, but it does little to deter fraudsters and marketers, some of them overseas, who are willing to take their chances and evade the law.

In an effort to stop the barrage, Federal Trade Commission has also held contests to encourage app developers to create innovative ways to block calls. And some phone companies offer blocking services.

When are Auto-Dialed Calls Legal?

With some exceptions — like calls from schools on snow days — auto-dialed calls to mobile phones are typically illegal, unless a person has given prior consent.

The same rules apply to creditors seeking to collect debts.

There are fewer restrictions on landlines, but prerecorded telemarketing calls are always illegal without written consent.

Infinity Solar, Inc. of Orange has not, and will not, participate in any auto-dialed sales or marketing call — ever. We support the ongoing efforts to stop robocalls from further bothering and, in some cases, stealing from consumers.